Did you know you can find yourself singing along to a song that's being made up right in front of your eyes? Neither did I, but that's what I found myself doing today. Showstopper! already has quite the stellar reputation at the Fringe, and it's very easy to see why. Having seen a few improv shows in the past I had some idea of what to expect, but I've never seen anything quite as spectacular as this.

The premise of the show is that a musical producer has a free theatre and needs a new musical to put on there, and he needs it written in 70 minutes. That's where the audience come in.

There can be absolutely no doubt that it is all completely improvised, as every idea is taken from audience suggestions, which allows for some very funny audience interaction throughout the show. Today, suggested locations included David Attenborough's bedroom and MI5, but the winner was Elon Musk's Space Station. After settling on the title 'A Little Musk Music', the company came on stage and our new musical began.

Every person in the company has a brilliant voice, which they all showed off in power ballads, love songs and showstoppers alike. I have to take a moment to appreciate the musicians, who managed to create the most brilliant soundtrack, bouncing off the cast to produce incredibly catchy songs. The lighting is also very cleverly done, with the operators also responding beautifully to the ever-changing plot and emotions of the actors to enhance each atmosphere. The entire production is pulled off nearly flawlessly, both onstage and off.

But the thing that makes this show so much fun is the way the actors feed off each other, mocking each other's mistakes and unexpectedly throwing a spanner in the works and taking the plot in a completely different direction, effectively ruining other actors' plans. They all respond brilliantly to this, keeping up the energy and the laughs no matter what. Inspiration from famous West End musicals such as Bugsy Malone and Jersey Boys is hilariously accurate, and slight costume tweaks and small props somehow transform characters entirely, creating magic right in front of your eyes.

Showstopper! is undoubtedly one of the most enjoyable shows I've seen, and I don't just mean at the Fringe. And the best thing about it is, you can go and see it as many times as you like because it's never the same twice!

Showstopper! The Improvised Musical is on every day at the Pleasance Courtyard until August 27th, excluding the 15th. More information and tickets can be found at the EdFringe website. 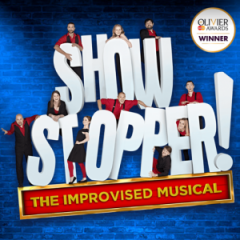