Young Pleasance deliver yet another brilliant production this year with their play, Curse of Cranholme Abbey. I'd been looking forward to seeing this show since interviewing two of the cast members last week, and it did not disappoint. The play tells the story of a haunted mansion, and the curse that transcends centuries to plague every occupant of the house since the Victorian era. The plot is revealed at just the right pace, creating suspense at key moments without being too obscure, and the interaction and overlapping of each time period is practically seamless.

The play definitely improves as it goes along, although that isn't to say it doesn't start well; it simply becomes more gripping the further in it gets. Both lighting and sound are used beautifully to create and then enhance the spooky, chilling atmosphere from the moment the audience enter the theatre, and create a thrilling moment at one point that made the entire audience jump! Occasionally the actors' faces were obscured as they were standing slightly outside of the lighting, but I'm sure this will be resolved over the course of their run.

The tension and suspense builds consistently throughout the play, aided by some particularly impressive and moving performances from George Jacques and Vee Tames, although the entire company performs well and there are no weak links. The set is cleverly versatile and manages to create a slightly different atmosphere for each era, while the beautiful costumes add to the authenticity of the production. It is brought to a chilling conclusion which left me wanting to watch it all over again.

I enjoyed the show immensely and could find little to fault. It's a complicated play that the company pull off brilliantly, and all I can say is that they deserve a full house every day!

Curse of Cranholme Abbey is on at the Pleasance Courtyard at 3:30pm until August 19th. More information and tickets are available at the EdFringe website.

Image, the cast of Curse of Cranholme Abbey on stage, courtesy of Twitter/Young Pleasance 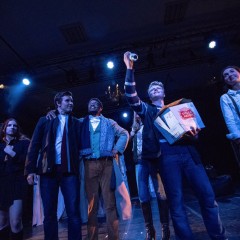