As with most MIF programme activity, it is about bringing together artistic partnerships, some of whom may not be the most obvious collaborators. With Available Light we saw the collaboration between three of America's great post-war cultural innovators. Choreographer Lucinda Childs, composer John Adams and architect Frank Gehry.

Let me start by saying that it was visually stunning: sparse, simple and lit wonderfully. The score was modern, exciting, quiet and with crescendos throughout. The choreography was full of motifs, minimalist, repetitive (that's not a bad thing) and elegant. But did that collaboration work?

MIF describes it as the 'perfect fusion of music, movement and art,' but perhaps that was its problem. It was perfect. So much so, it was slightly sterile. The piece, split into two movements, told the tale of society unable to move and function in unison, but the world spins the same way, just at different times and from different perspectives. As the piece came to an end, the world did move in unison - as it occasionally can. The set - beautiful and minimalist - was under used, which was a huge shame.

Although Childs' choreography is renowned for minimalism, there was little engagement with the set - except for the fact the stage is on two layers. When it was used briefly visually it was stunning and I wish they had used this so much more.

The choreography was beautifully elegant but the piece almost needed something a little ugly, something more abstract. Childs' developed her style working under masters such as Merce Cunningham - who exploited the minimalist motif within choreography in contemporary dance - and I just wished she took more influence from Cunningham's habit of making an audience uncomfortable with awkward repetitive movements. I think it would have taken this beautiful hour of dance to another level.

Overall, an hour of beauty but with slight disappointment with it not going far enough in areas and being just far too beautiful. 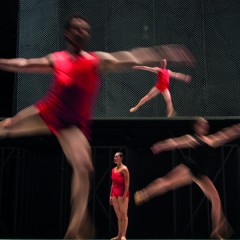