I could tell from the name of this show that it was going to be slightly mad, and it certainly lived up to — and surpassed — that expectation. Eva Von Schnippisch is rude, brash, confident and hilarious, and had the audience laughing from the moment they walked into the theatre. Her voice is quite spectacular, so the musical numbers were highly enjoyable, and she did a very good job of playing numerous characters at once. She did have some sound effects to help her out which were well done, and the changing lighting states to depict different moods were effective and often comical.

As is often the case, it was much funnier when things went wrong, and Eva knew it and used it to her advantage. Her interactions with the audience were spot on throughout, although I think even she was surprised by how energetic her audience was that night. She kept the laughter coming reasonably consistently, and her bold and confident persona was lovable in its sheer audacity.

Her frequent costume changes became slightly irritating as they took up a long time (which she attempted to fill with commentary that was only occasionally funny) and the pacing of the piece seemed slightly off as the ending felt a little rushed, but the show was overall very enjoyable. I'd definitely recommend it to anyone who wants a good laugh! 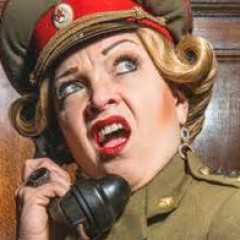