Voice MagReviewsCircled in The Radio…

This simple show by John Osbourne is a beautiful insight into the habits and mindset of a man, gleaned through his collection of The Radio Times and told by his grandson, who found himself immersed in the magazines and what they revealed about his grandfather. The piece is brilliantly written, and I found myself thinking the entire way through that he should write it down and make it into a short story, because I think the incredibly poetic language and dramatic structure would lend itself even more towards a written piece.

The narrative itself, while littered with humour, is at times an emotional one, and the slow, steady pace works perfectly for the story being told. There's no lighting or sound effects, no props (save for some of the magazines themselves, which were laid out on the floor) — nothing to detract attention away from John, which I thought was absolutely right. There is something incredible captivating about him, and he held the entire audience from start to finish without even seeming to try. The simplicity works, because he doesn't need anything to help him tell this story — he does it very well on his own.

While there were a few jokes and 80s references which went over my head — although, judging by the rest of the audience's reactions, were very amusing — I thoroughly enjoyed the show. John Osbourne's endearing nature and charming storytelling abilities make this piece a pleasure to watch. 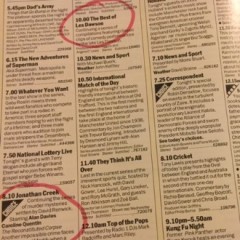 Circled in The Radio Times