In Individual Medley, Katrina Quinn tells the story of her years living in Zambia as a teenager. The narrative, which focused on the self-esteem issues and desire to fit in that most teenagers experience, is one we are all familiar with, but the medium through which she tells her story is one many may be encountering for the first time when they see this show. As a lover of spoken word myself, I was intrigued to see how Katrina would fill an entire 50 minute show with a form which is often most effective in very short acts. While I was impressed by her writing and some of the delivery, I still believe that spoken word is more suited to shorter performances, as there were long periods during the show when the tone did not change and the energy of the piece was lost.

Katrina drew a lot of parallels between swimming and different stages of her life, which I found interesting and often very effective. She drew these parallels mainly by switching often between describing the two, and while I picked up on what she was doing, I felt that there could have been more of a contrast between her delivery of the two concepts. Her volume, tone and pace were often identical when she switched between them, and I think it would have been more effective had she altered her voice in some way in order to highlight the change in theme. The writing itself was very well done, however, and maintained a good rhythm and structure throughout the majority of the piece.

Katrina also used a lot of physical theatre in the show, which at times was very well done and added another dimension to the piece (and often some humour too, as she was 'swimming' on land). Occasionally, however, movements felt slightly superfluous, possibly because she didn't commit completely to them, which made them seem halfhearted and lacklustre. I was also disappointed that on two occasions she read her lines — I appreciate that she had a lot to remember and that prompts are often necessary, but she did not even attempt to be subtle about it, blatantly reading out of a notebook at one point, which I thought was a real shame.

I left the theatre not entirely sure whether or not I enjoyed the piece, and I must admit I'm still not certain. I found the narrative interesting and I like the style of theatre, but it didn't leave me gobsmacked or desperate for more. It was just…good. 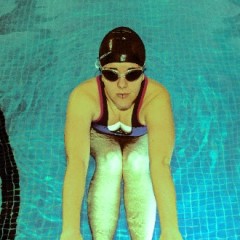