Power Story aims to educate the audience about the dangers of our current use of fossil fuels by portraying a town in 2050 that suffers blackouts due to lack of energy resources. The audience complete a series of challenges in small groups in order to fix the electricity grid, a zig-zag of tape on the floor. The activities were faintly reminiscent of games played at school, such as building towers from toothpicks and raisins, a short relay race and completing jigsaw puzzles. Each activity was preceded by an educational video about a particular topic, such as fracking or nuclear power, which I thought was a nice touch. However, an unfortunate side effect of the aforementioned blackouts suffered by the futuristic town was the use of minimal lighting, which often made it difficult to see what we were doing.

The activities were interspersed with short sketches involving some very basic puppetry and poor attempts at comedy, which — although in theory a good way of incorporating humour into the piece — fell slightly flat. The acting itself was, at its best, mediocre, although the enthusiasm of the other audience members was infectious and meant I enjoyed the show more than I would have had they not been so keen to get involved.

I cannot emphasise enough how commendable I find the idea behind this show, as the combination of theatre and education is something I'm a huge advocate for, but the execution was not of a high enough standard to really allow this piece to achieve its aim to educate a wider audience on the issues surrounding our usage of energy. I have great respect for the two girls who put the show together, but I don't think they have futures in theatre. 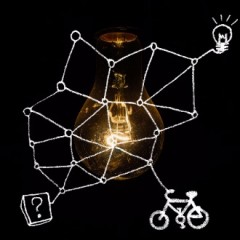