Dangled, based on Nikolai Gogol's short story 'Diary of a Madman', was the most intense monologue I have ever seen, leaving the audience on the edge of their seats the entire time. Rob van Vuuren takes on the character of this 'madman' so incredibly well you forget that you are watching a piece of theatre. The piece was described on the Fringe website as being "a dark psycho-sexual horror comedy" which I would say is a very accurate description.

The whole performance was very short, at only around 40 minutes, but the audience was captivated by his remarkable comedic timing, exaggerated facial expressions and deliberately uncomfortable actions and movements. He spoke in a way that was almost Shakespearean in style. Some of the language seemed complicated at first, but was completely understandable to his intended audience of people aged 15 years old and over.

The performance, as a whole, was flawless. Everybody watching, including myself, appeared fascinated by his portrayal of this 'mad man'. The only downside was I desperately wanted more of it, and I'm sure I'm not alone. I was so intrigued by this character that I wanted to watch and learn more. It's one of those shows that you have to watch to truly understand why it is so clever and well performed. 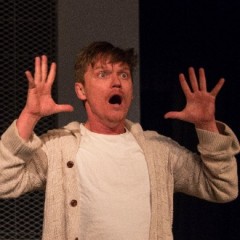