The Love of Stationary is a one women comedy performed by Lisa Maria Berg. Her character works in a stationary shop and collects some frankly bizarre things. She meets a man at work and her crazy schemes to have him be hers begin. There's only one thing in her way - Deanne.

Humour is subjective. What one person finds funny, others will not. Thus, it is challenging to create a comedic piece of theatre that appeals to an audience. Lisa done a very good job at combining different types of jokes that will appeal to the different variety of tastes. There were innuendos, hyperbolic characterisation, and dark humour. Some of these jokes worked but others didn't.

One of the best parts of the performance was the way Lisa worked with the audience. One of the men in the audience was laughing really loudly and longer than anyone else. Lisa saw this as an opportunity to give him a strange look and at times looked directly at him when making jokes. This was a nice, personalised touch to the piece.

At times, the actual storyline felt a bit all over the place. The topic changed quickly but at the same time, she did often return to a topic and extend the joke to the max.

So while the show was funny a lot of the time, the layout remained jumpy and the comedy didn't always work. However, Lisa showed talent and charisma in the way she used the audience to her advantage and in the content overall. The idea was very creative and that is the main selling point I think. 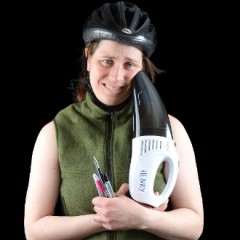 The Love of Stationary