Voice MagReviewsDignity Off: A Show…

Sunjai is...32 maybe?? Brown, long-haired, scruffy, "a little extra" build. Dressed, at least to begin with, like a slacker - in shorts and a baggy t-shirt.

Matt's humour is how I imagine the after-hours entertainment at Butlins. In the 1980s. His uncomfortable, detailed vignettes encompass sheepshagging, back, sack 'n' crack waxes, and vasectomies. His mind never strays far from his genitals.

Sunjai's humour is surreal. He says very little, passes a lot of his set stringing out silent costume changes, sings silly adulterated covers of songs, and hints at his vulnerability.

So yes, Matt and Sunjai are different. And their difference is the central conceit of 'Dignity Off'. Matt and Sunjai decide to do a show together; they each write 30 minutes of material. They both hate what the other has written. So they are going to take it in turns to a) try and make the audience laugh and b) lose their dignity on stage. Every so often Sunjai interrupts Matt, decrying his penis obsession, or Matt interrupts Sunjai because he seems close to a breakdown. Thus the show veers between Matt's cheese and Sunjai's chalk.

Towards the end they are supposed to reach some kind of synthesis, in which Matt stands on a pack of biscuits dressed as Cher and they duet 'Dead Ringers for Laughs', and Sunjai finally allows himself to indulge in knob jokes and innuendo. Except they (whether intentionally or not who knows) kept fluffing up the lines of the song so in the end Sanj just explains to the audience what was supposed to happen. And that's the end of the show.

I couldn't tell whether I was supposed to find Matt as objectionable as I did. I cannot imagine any woman, in particular, sincerely finding his jokes funny. And his delivery and demeanour were likewise a turn-off. Was this all part of the act? I'm not sure. But I was always relieved when Sunjai reappeared on stage.

Yes, Sunjai is more my kind of humour. He is also an excellent performer. Able to reduce the room to giggles just by velcro-ing bits of fake fur to his chest. Makes out he's unpolished but has exquisite timing. The kind of comic who could slay you just by the way he pretends to put his glasses on.

So I wasn't into Matt and I was into Sunjai. And I'm sure there were some people in the room who felt the complete opposite. Does it work as a concept? Hmmm...perhaps not. But at least I spent half of it laughing. 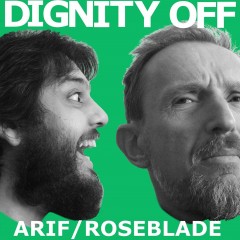 Dignity Off: A Show of Two Halves