Borderline is a piece of satire theatre addressing the situation in the Calais Jungle. The Jungle was destroyed on 24 October 2016, leaving behind its 10,000 residents - 1,300 of which were unaccompanied minors. These residents have been trying to escape horrific circumstances such as war and conflict. All of them hope that by hopping in vans and trucks to countries like the UK, they will have the opportunity for a better, happier life. Waiting at the border. Waiting, waiting, waiting. Many do not make it to their destination.

This piece of theatre, by theatre company PSYCHEdelight, used Brechtian techniques such as alienation (a technique which is used to distance the audience from the emotional aspects) and breaking the fourth wall to portray the horrendous living conditions of the adults and children living at the Calais border.

The actors also used clowning skills, as inspired by their Clowning Facilitator Frank Wurzinger. The actors took some of these techniques and used their bodies to make non-human objects and creatures.

PSYCHEdelight also use comedy to show the ways people at the border cope. Sophie Besse, the director, visited the Calais Jungle and witnessed a great deal of pain but also many resourceful and resilient people. This was incorporated into the show, and the comedy aspects show the determination of the residents.

This piece of theatre opened a lot of discussion. Everyone in the audience left the show talking about their views on refugees and this was extended in a Q&A after the show. People, young and old, had questions and I think that demonstrates what an eye-opening piece of theatre this was.

Overall, this show was well scripted and prepared. The Q&A after the show expanded on it and even gave the audience suggestions as to how they can help the refugees who were living in the jungle. 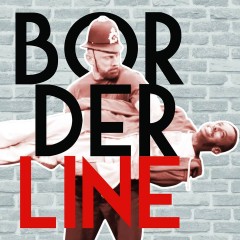