Kealy managed to discuss quite heavy political issues in a light way, bringing in modern media references to back up his points and really engage with the audience. His natural likeability shines through and his relatively humble approach to humour creates a great rapport with the audience.

Although it was clear he was quite nervous, expecting a smaller audience at a 12 pm comedy show compared to the full room he got, he managed to keep us giggling and laughing for his set. Even when his structure fell apart slightly, he had the comedic skill to address it and make it funny, assuring the audience stayed laughing with him.

Unfortunately, some of the jokes were following a video set-up playing on a small laptop screen making it hard for the audience further back to see what was going on. However, this would easily be fixed with a little technical assistance next time.

I so very much wanted to give this comedy show 4 stars and it was almost there! With some more preparation and structure it will easily achieve a higher rating. A young comic, Kealy is still treading the waters to find the style that works best for him. However, he is clearly on the right tracks and with some fine tuning this show will easily reach it's potential. 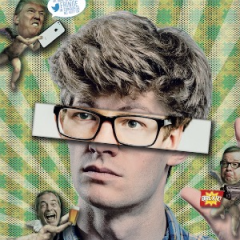 Alex Kealy - Too Early To Say