A lot of the sketches missed the mark, but the one that hit scored highly. The audacity came from things like dead baby and necrophilia sketches, which are fair game, but they just didn't always land because their executions were predictable. A lot has been made about the Intimate Strangers' originality, which is abundant in their ideas, but I couldn't help but feel they could've pushed themselves more with the execution to create sketches that started and stayed somewhere that the audience wouldn't have the foggiest idea it would end.

There were attempts at allusion that could've been more subtle and less dragged out. Some of these did land and landed well with full audience laughter – though more often than not there was just a smatter. The James Bond gambit was one that, converse to a lot of the rest of the material, had a lot of potential but was underplayed.

Character impressions demonstrated a great vocal talent in James Taylor Thomas but what was actually said, like smoke, billowed into nothingness. It felt as if they got bored of the characters themselves when writing.

There's the go-to question of 'how many times can you tell a dead baby joke?' that demands comics play with boundaries as well as variation. While there was only the single dead baby joke from The Intimate Strangers, the treatment of jokes and topics of similar levels of controversy that require poise felt wanton. 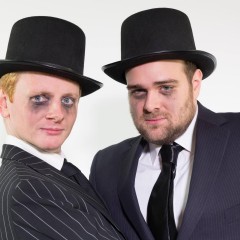