For fans of the Power Rangers franchise, it's been a long and bumpy road to the film release and as with anything it's been a mixed bag of reactions.

As a fan of the original show, I went to the new release hoping that somehow this production would manage to combine the cheesy fun of the original with a new updated excitement that today's action films bring us and in my opinion, it did.

*SOME SPOILERS AHEAD, PROCEED WITH CAUTION*

The first blockbuster "superhero" movie to feature autistic and LGBTQ heroes, the film brought a new twist to the characters and allowed the story to grow. It's clear that the writers are fans of the original show themselves and wanted to explore new possibilities whilst referencing the original *cough* "It's Morphin Time" *cough*

What we have to all remember is this is an origin story and therefore there will be sections that have not come up yet, there will be moments that you may feel are missing but that is the build up. This movie successfully set up five new characters who now have the potential to grow into the rangers we know and love.

Although many critics seem to disagree with me, it cannot be denied that overall audiences seem to be enjoying the new cinematic reboot. A show that was in all honesty created for children has been given the chance to mature and is now joining the world of Transformers and Marvel for us adults who still want to run around and be superheroes.

There were two characters who made the movie for me, Billy Cranston and Rita Repulsa. Billy, it is soon revealed, is on the spectrum and struggles to interact with others. However, from the first few moments of the film, you can feel he is just like you and me, ordinary but wishing deep down he was a superhero. This lovable character, portrayed by RJ Cyler, captures your heart almost instantly and constantly reminds the audience that we are all big kids who just want to pretend we are Power Rangers.

*Commence argument about who can be what colour ranger*

Elizabeth Banks is well known for many appearances ranging from Scrubs to The Hunger Games. However, girl held her own in this movie. She had a difficult task of bringing Rita Repulsa to the screen. Cleverly, Banks chose to camp it up and play to the comedy (and creepy) that her character provided. Reminiscent of Gollum in one of her opening scenes, she quickly establishes herself as a terrifyingly awesome villain, obsessed with Gold and Krispy Kreme. With some great comedic scenes, Banks provides some light relief to the teenage angst and manages to make us laugh whilst remaining truly disturbing.

With fight scenes, cheesy lines, teenage angst, Alpha 5 and Zords it was all I was expecting and more. The origin film kept its essence whilst opening the doors for a brand new franchise. If you count yourself as a "Power Rangers purest" or you have never watched the show before, you may find yourself questioning every scene and just not getting it. However, if you are a fan of Power Rangers and want the movie to progress to new potentials, whether you are Red, Blue, Black, Pink, Yellow or Green (what? Go watch the film) you will enjoy watching them go - GO GO POWER RANGERS! 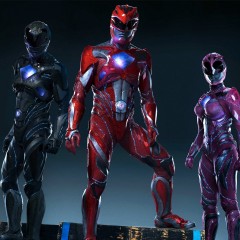