A good show to stand up show to catch at the fringe, Robin Morgan's Free Man is great for laughs. The convenience of the name makes a great pun but the show has nothing to do with Morgan Freeman.

This is the tale of Robin's failed proposal to his fiancé in new York city, he tells us the build up to it and tells us how she proposed to him instead and how it became her story – touching.

The jokes were funny from the get go. Robin started out with the audience before getting into the main story. It was funny how he made a guy at the front seem like he was into some freaky stuff.

The pacing of the show was good, not a dull moment came about. Most of the punchlines were good and smarts, not all comedians try to be clever with their jokes but Robin plays it off well.

The use of slides was a nice way to express what he was describing. The blurred photos of his fiancé became funnier the more they popped up. What was great was seeing a blurred image of their house, gives home security a whole new meaning!

Overall the show was enjoyable; Robin is a great comedian with passion and heart and deserves to be seen more at the fringe. 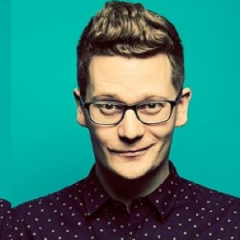