Poking fun at Chinese stereotypes, Jinx Yeo's A+ Underachiever is a mix of unexpected laughs and misfires, at its best commenting on the global rise of the comedian's home country. This was captured well in a string of jokes about China's money lending to the US, characterised by an imagined Captain China's superpower: bailing out Captain America. Having grown up in China and studied in America, Jinx Yeo understands the subtitles of each country well, as well as the cliches that we know the world over.

Material about his parents' expectations were also hilarious — content that might feel horribly generalised in a western comedian's routine (tiger moms, the relentless push for excellence and the inevitable disappointment that follows) felt fresh and well-observed.

Portions of the show that fell a little flatter mainly focussed on women, feeling that bit too one-dimensional to really say anything new, and occasionally verging on sexism. Poking fun at the time women take to put on their make up, and the ways to win women over, there didn't seem to be enough layering or self awareness to match some of the sharp observations about gender and sexism that have been present in many of the other Fringe shows.

Nonetheless, this was a highly enjoyable show, with plenty of great material. 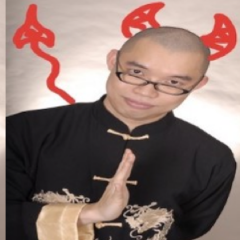