Arriving at the eleventh hour, I slipped into one of only a handful of unoccupied rows as I looked upon a sea of people inhibiting the packed-out hall in the heart of one of Edinburgh's busiest venues. With a rich history in comedy, radio and television, English comedian Mark Steel is greeted by a realm of loyal devotees and likewise we are greeted by the warmth his presence exudes.

Steel's knowledge extends further than short-lived gags or the elementary ability to interact with the audience, as he comes prepared with endearing news article print-outs and a slide-show of pictures reigning from his travels; depicting his adventures hailing from Northern Scotland, to Wales, England and Ireland - and a history for each. Teasing the idiocy and insincerity of hipster trends, modern technology and Jeremy Corbyn; and slaughtering Orkney while on route, his set made me laugh on my own accord, relating to fragments, and enjoying the remainder as others related too.

While poking fun at Paisley's picture-covered shops, reciting Burns or highlighting the devastation the highland clearances caused Gaelic culture, Steel accurately debunks ancient theories and modern-day abominations. His wit comes paired with intellect as he sails through his set like a pro; less like a stand-up comedian and more like a treasured teacher who's lesson you learn more in than all others combined, while having a good laugh. His set flew by and failed to lose momentum throughout.

Embodying the characters he speaks of, his energy is infectious and I left in a far better mood than I did coming in, which in itself wasn't low. I'd recommend this man, because if you haven't seen him on television or heard him on the radio yet, then you owe yourself the pleasure of witnessing a comical master perform upon our soil he sorely, humbly and graciously adores. 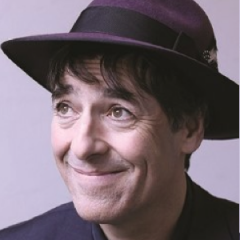