To describe Paul Currie as a funny comedian would not do justice to the performance he gives at Edinburgh Fringe's Heroes @ The Hive. Paul goes above and beyond in his latest show, FFFFFFFMILK!

The Hive is a space which cannot produce a full black-out because of the ceiling lights, and the level of creativity was impressive. He had two sticks with boxes at the end of each and had myself and another audience member hold them above the lights to create his desired black-out so that he could fly onto the stage for his entrance. Confused? Well imagine a mini figurine of himself at the end of a stick, lit by a flashlight, flying through the audience as his way to the front – now that's how you make an entrance.

From the get go it was a brilliant show, from his ridiculous lip-syncing to swallowing the background music and slowly farting it out. There were too many hilarious moments.

FFFFFFFMILK! has a series of different sketches where the audience can get involved. In one particular sketch, this involved playing the flute to summon a snake out of a box (the audience provided the flute noise), and it quickly turned inappropriately funny.

Other moments featured a Brazilian dancing brick and an amazing Christopher Walken impression, but the best part was a recreation of the scene in Star Wars where Paul as Yoda used The Force to pick up a rubber duck which crashed into an audience member, the guy slowly brought the duck back to the stage as Paul gestured.

If all of the above sounds ludicrous, it is. It's also great fun and hilarious - Currie is easily the King of the Fringe. To manage even making the task of eating cereal really funny is a win in my book. 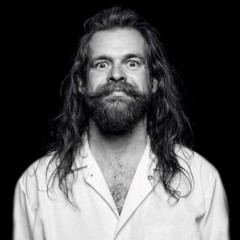