The middle-class, Turkish-Englishman has a lot more than just his culture to credit his humour to: all his character flaws are more than enough.

The title refers to Osmanoglu exposing all his regretful adult behaviour up until the age of 30 to the audience. He breaks down the explicit, gluttonous, and just bad fallout after a bad break-up that saw him spiral further and further.

A member of the company Wittank, he is no stranger to the stage and you can tell. His confidence and delivery is evident and every anecdote is well timed. Some of them go into such brutal detail in such a blasé way that it can't not take the audience aback somewhat. All of this on top of being a self avowed 'posh t**t' who still calls his parents mummy and daddy makes seem even more uncharacteristic. This gives the routine that classic contrast that provides so much humour.

He tells us about his racist dad and the hypocrisy of minorities voting to leave the EU, which got some big laughs. It also may have given some insight into where he gets some of the dysfunction. Lots of comedians have side-splitting stories and self-deprecating gags: none, however, are quite as overt and messy as Osmanoglu's.

His honesty is endearing, some of the things he's done are reprehensible, and his stage presence is top quality.

Naz Osmanoglu: Exposure is on at 21:00 at the Just The Tonic at The Mash House until 28 August. For tickets and more information, visit the Fringe website. 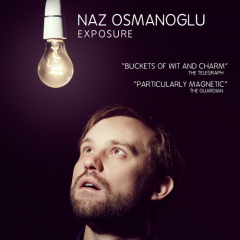 The middle-class, Turkish-Englishman has a lot more than just his culture to credit his humour to: all his character flaws are more than enough.