Something that British stand-up comedy mostly fails to do is actively address the comedians' important issues. Otway's honest routine bucks the trend.

Rather than trying to say something important shrouded by comedy, Otway has the balls to tell us about his demons in as many words without worrying about the repercussions around how 'soft' naysayers might think he's being. He takes us through the last six years referred to in the poetic show title and the low points in his life stemming from a breakup.

All of this includes his relationships with his mum and his friends who sound like a real-life bunch of Inbetweeners. Many comedians have a talent for extracting comedy from their darkest experiences, but few with the deftness of Otway. Do not go into Otway's show with any expectations. As much an honest and thorough storyteller he is an audacious and considerate comedian for putting his audience in the position to follow his story with him.

He allows us to laugh at him at the same time as teaching us something about the need to talk about male mental health. Some of the humour was a bit too untenable for the audience to be able to laugh at but that problem is a part of something bigger. The anecdotes were dark and came from an original place and mostly hit the mark perfectly but those that didn't were noticeable.

Otway is another one of those singularly genuine comedians that are a dime a dozen.

Pete Otway: Six Years From Then is on at Just The Tonic at The Mash House until 17:00 everyday until 28 August. For tickets and more information, visit the Fringe website. 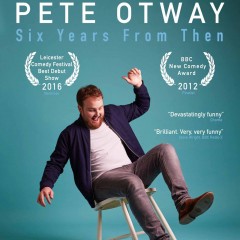 Pete Otway: Six Years From Then

Something that British stand-up comedy mostly fails to do is actively address the comedians' important issues. Otway's honest routine bucks the trend.