A satirical take on the 70s buddy cop action drama that takes on so many of the classic stereotypes that it becomes original all over again.

The Pretend Men used every 70s trope they could fit into the show: elaborate moustaches, the retired crooked cop, the big twist, excessive shirtless-ness and a great deal more. On top of using period tropes they used all kinds of nationality stereotypes, taking on the hyper-American, the Cockney barkeep, and the sinister Mexican.

They used these elements with such exaggeration that they are ridiculous and brilliant. You think they've used them all until they creep another one in to make the show constantly entertaining. They would also throw in some original scenes and improvisation to get some of the biggest laughs of the night as the trio would struggle to keep straight faces in character.

The camaraderie among them came through in the performance and served the buddy cop approach even better. Some of the accents took a while during the show to refine themselves but this was overshadowed by how evidently well rehearsed they were. Their timings were perfect to deliver some impressively synchronised 'dancing' and physical gags. Everything was fundamentally used to celebrate seventies film down to the costumes and the music.

It's quite a brave show in its approach to take on an entire genre without a specific story, more of an overview of the repetition of story structure in the genre. Only the second show (the other being Showstopper! The Improvised Musical) I've ever been in that got a unanimous standing ovation and it deserved it. One of those serendipitous shows that wouldn't have been seen were it not for a cancellation and I couldn't be happier with my choice.

The young company of The Pretend Men have won awards and five stars from all over the world for their debut show and can only hope for a future as rich and varied as Police Cops itself.

Police Cops by The Pretend Men is on at 21:45 at Queen Dome, Pleasance Dome until 28 August (exc. 24 August). For tickets and more information, visit the Fringe website. 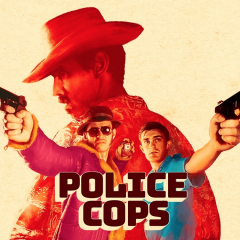