Cody's signature charisma and stage presence is back with new reflections on his life.

Ruminations about the experiences he's been through in the past year and observations he's made are told in a way that is effortlessly funny. A recurring joke is a dangerous thing: it's all about timing and the fact that him making a single noise severally and still getting a reaction is testament to his writing.

In a larger venue than last year, he still managed to maintain an electric relationship with the audience that saw the laughs stream constantly for the hour. Comparing it to his Voice's Pick of the Edinburgh Fringe award winning show Beard Game Strong last year, his stories still focus around much of a geezer-ish "shithead" he is. He touched on the subjects of people, like himself, who wait ages to learn to drive and the pros and cons of state and private education, which felt like a bit of a too seriously made point.

The most memorable part of his show last year was some sweet, sweet audience interaction, which was missed this year. It made the show dangerous and audacious and the same qualities were lacking.

Nevertheless, everything he came out with got people laughing. How professional he is on stage still begs the question why he isn't on British television more. A reworked joke about his time in Afghanistan cut close to the bone and was an excellent way to finish off.

A guaranteed laugh regardless of what you look for in your stand up.

Nick Cody: Come Get Some! is on at Studio Three, Assembly George Square at 21:20 until 28 August (exc. 15 August). For tickets and more information, visit the Fringe website. 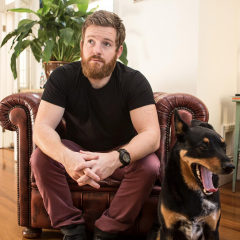 Nick Cody: Come Get Some!

Cody's signature charisma and stage presence is back with new reflections on his life.