This is a brief history on the life of Lynne Jassem, from when she was a young dancer in the Perry Como Show to when she finally got her break dancing in Grease.

Lynne is a multi-talented performer. She moved from performing as her cigar smoking uncle to her frantically super-talented mother with ease, punctured with fantastic moments of singing and most importantly, tap dancing – truly talented.

The show highlights many themes, including growing up and sexuality, in an original and though provoking way. The character Billy - the male version of Lynne - was like some form of subconscious or second personality which Lynne was suppressing in her childhood. This offered a light-hearted but poignant take on this time in her life.

Although it was a good performance, some of the references were quite niche and dated. She spoke of things that only people of her age would remember which is fair as most of the audience member were of that age, but the show might not appeal to a younger audience.

Her story was well told and the light in tone, but not all of the humour took with the audience. In some moments we really were laughing, while in others we were obviously meant to but didn't quite get there.

The overall message, that it's okay to express yourself the way you like, whether it's through dancing or wearing boy's overalls, was a good one to take away. 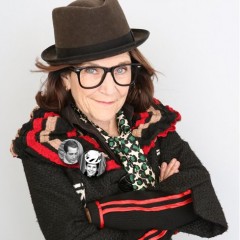 Lynne Jassem: from Como to Homo