This performance, the last I was seeing at the Fringe before heading home (you always hope for a good one to end on) wasn't particularly awful, but it left me feeling like there could've been more.

You have the one actor, who plays multiple characters but mostly goes by the name of Mr Bagman for obvious reasons, who tells his audience of his journey to find The Answers that his father (Bagdad - I know) has given him, which turns out to be a charming journey of self-discovery.

On one hand, I loved the energetic performance of Brendan Murphy who managed to conjure his silly and off-beat characters into humorous and obnoxious caricatures, and the audience interaction was also on point. On the other hand, there were times where I felt like it was all just too much, without enough real comedy.

Ridiculous in parts, funny in others.

Enter the Bagman is performing at The Counting House (Venue 170) on August 12th - 28th (excluding the 15th). For more information please visit https://tickets.edfringe.com/whats-on/enter-the-bagman 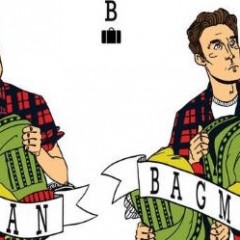