Do we consider Paul Merton an institution yet, because we should!

Paul Merton and his impro chums Mike McShane, Lee Simpson, Richard Vranch and Suki Webster completely sold out Pleasance Grand, and then processed to perform some incredible improvised comedy over the course of the hour.

Anybody who has seen improvised comedy will know what to expect. The comedians all performed scenes without the aid of a script, prompted by suggestions made by the audience.

Before the show people in the (exceptionally large) queue were asked to write down suggestions on a piece of paper, and these were selected at random for the theme of various small sketches.

They also played a game called DIE – where a story is started by one person, and the next has to be able to seamlessly carry it on when they are pointed to. If someone fluffs up their lines the audience is to shout 'DIE', and the Impro Chum who screwed It up has to sit out. The winner is the one who is not sitting out.

These folk are fast. The speed at which they decide a joke or a sketch and then run with it is incredible, and more often than not they really hit the mark. Some bits fell short, and others were so niche and obscure it washed over the heads of audiences of a certain generation, which is a shame.

Merton must truly be considered a British institution at this point, he's definitely up there with the greats.

Paul Merton's Impro Chums is on at the Pleasance Courtyard at 16:00. Tickets and more information are available on the website. 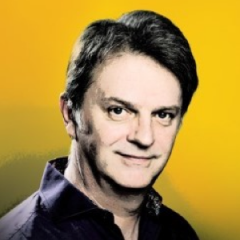 Do we consider Paul Merton an institution yet, because we should!