Tommy Holgate's Man in the Miracle, much like the subject matter he covers in this hour-long comedy show in the basement of Laughing Horse's Moriarty's at Ed Fringe, is complicated, hypocritical and rather confusing. This is due in a large part to a genuinely complex building of Holgate's zen character, new found inner peace fully intact. Where that character begins and ends is a total mystery — and all for the better. There are huge sections of his monologue that I thought were a total fabrication, which on later search turn out to be entirely true. Or are they? Perhaps they're just a further part of one big joke.

Slathering coconut oil on his face, gnawing on lumps of fresh ginger and stuffing handfuls of spinach into his mouth while addressing the audience, Holgate's performance is a rambling account of his life pre- and post-revelation, via Jeremy Corbyn, The Sun Newspaper, human miracles and plenty of breathing exercises. But this performance steers clear of a simple finger pointing, belly laughing affair, and Holgate's straight delivery, lack of punchline — well, there are a few — and meandering story-telling leads to deeper audience contemplation. We know these people are ridiculous. I know and laugh, despite having my fair share of almond milk, coconut oil and agave nectar stacked up at home. I giggle my way through breathing exercises that I would usually treat with 100% seriousness in my weekly yoga classes, inner white light and all.

The really effective thing in taking on this character, rather than firing wise-crack after wise-crack at it, is conveying quite how dull conversations about 'inner joy', 'childlike playfulness' and the 'miracle of life' really are. Man in the Miracle does draw chuckles, but also boredom, irritation and more serious thought. This is how it really feels to be stuck in the room with a new found peace hound for an hour, and it isn't fun. Although, in many ways, it also is. 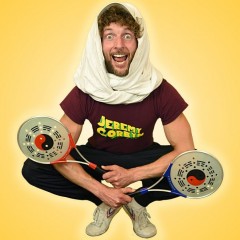 Tommy Holgate: Man in the Miracle