What do you get if you combine an Aussie woman, cooking and Tom Jones? JoJo Bellini of course!

JoJo Bellini has more energy than your average performer - cooking, singing and dancing her way through her hour-long performance. To my surprise, she actually cooked food during her show, and served it to her audience towards the end. The food was alright, nothing special, but then what can you expect from something cooked in 40 minutes for a room full of people by a woman putting on a show? She linked the themes of all the songs to the tales she was telling us, so that there was some sort of storyline to her show.

Her singing was good, although singing the songs of someone as iconic as Tom Jones, who has such a beautiful and distinctive voice, you're never going to sound quite as good in comparison. Many members of the audience really enjoyed the songs, and many were spontaneously singing along. JoJo had us singing back up and joining in on some of the songs which elevated the already vibrant atmosphere in the room. Her bubbly personality lit the room up from the moment she walked in, and she came out with some hilarious, albeit rather rude jokes. She is fun to watch and clearly loves performing, relishing in the reactions of her audience and sharing her deep love with Tom Jones through the beauty of his music.

JoJo is fairly crazy, something she admitted during her show, and this is displayed in her set as she dances and commentates over her cooking. Overall this was a good show, although Tom Jones isn't necessarily my artist of choice when it comes to music, but some of the older members of the audience definitely enjoyed it.

JoJo Bellini's Kitchen Cabaret is on at 13:20 until August 28th, excluding the 15th, at The Stand Comedy Club 2. 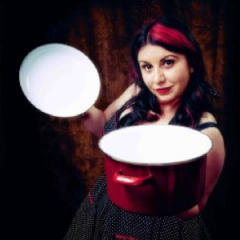 What do you get if you combine an Aussie woman, cooking and Tom Jones? JoJo Bellini of course!