Another hard-hitting story from an unheard voice in the Middle East by the company behind Echoes.

Echoes was the second part of Naylor's 'Arabian Nightmares' series: a two-woman story comparing the current situation in the Middle East with that of the British Empire. Angel presents a one-woman story of a schoolgirl-turned-guerrilla against Da'esh. The type of story that the world has become all to used to. The development of the narrative focused upon the main character's relationship with her father in a once peaceful town. This is reminiscent of the relationship between Malala Yousafzai and her father when they were in Pakistan – a deft and gracefully used reference.

Things got darker as time went on. It is a fully impossible position in which to imagine yourself and, for an actor playing this role, an ambiguous responsibility. Is it possible to be as intense and forlorn as the character would undeniably be? A better question is if it is useful to try. For it would be a greater insult to assume an unimaginable current reality than to underplay the intensity of the emotion. A subtle and poised performance by Filipa Bragança brought tears to eyes.

I see creative writing in a macro/micro way. You can have strong specific dialogue, but a overall story that barely moves on and vice versa. Here the story was compelling and eye opening and abundantly active. But some dialogue felt forthcoming and, while this is understandable for fitting such a rich story into an hour's show, some deeper presumed knowledge might've provided some delicacy.

The descriptions, while short and snappy, enabled us to visit the warzones, the rural villages, the camps. The fact that we're left so much to our own imagination is telling of how we develop stances and opinions on issues in the Middle East based on little fact. A single prop set made, for lack of less of an understatement, a busy story comprehensible and lighting was used effectively to convey complex emotional states.

Angel by Henry Naylor is on at 16:30 at the Gilded Balloon Teviot until 29 August (exc. 17 August). For tickets and more information, visit the Fringe website. 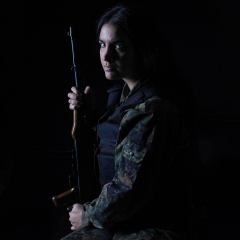 Another hard-hitting story from an unheard voice in the Middle East by the company behind Echoes.