It weaves the story of a young girl on the search for her best friend after he goes missing. The storyline is sweet and captivated the children in the audience, but isn't necessarily your standard fairytale.

The costumes were inventive and effective and aided in making it clear to the children in the audience which character was being portrayed, as many members of the cast played multiple parts. The lighting was clever and made it very easy to imagine the scene being set. The use of a white cloth at the back of the stage to create silhouettes behind was impressive and the pieces used to create the silhouettes were small but effective. The props were bright and colourful, as well as many of them being larger than life, which reinforced both the comedy aspect and the telling of the tale.

For me, the play was just above average. I've always loved fairytales and this wasn't one of the best ones I've seen. Having said that, I can't deny that almost every child in the audience sat still and quiet for the entire duration of the show, each one captivated by the tale unfolding in front of them. From this it is clear that this show is successful in pleasing those whom it aims to please, and that ultimately is what is most important.

For a free-spirited show that puts a spin on the fairytales you thought you knew, go and see this show. It is ideal for young children.

The Snow Queen is on at 13:00 every day until the 29th August, excluding the 16th, at the Gilded Balloon at the Museum. 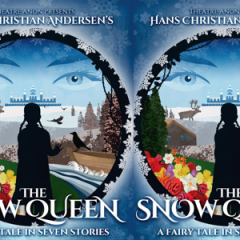