His language is delicate and melodic, each line meticulously written and not a syllable, sound or iamb is without meaning, in his timeless works which establish him as one of the great things to come out of Britain, alongside sarcasm and Jeremy Hunt. However, after seeing Magnificent Bastard's production of The Merchant of Venice, I doubted Shakespeare's brilliance, witnessing Beyonce's 'All The Single Ladies' performed in the middle of Jessica and Lorenzo's love scene, you do wonder; 'if Shakespeare was such a good writer, then why did he never think to write this in?'

A simple concept, with tremendous results - Shit Faced Shakespeare truly may be one of the best hours of your life, as four actors and two umpires fought together valiantly in an attempt to complete an abridged version of The Merchant of Venice in an hour, battling against an inebriated actor, content on causing mayhem and abandoning any plot or character they once knew of as their sober self.

With the limelight fixed firmly onto the drunk actors and their antics, the audience develops an insatiable hunger for the drunkard to entertain us, always wanting more. Our mischievous and hop-headed Jessica, whose blunt profanity and persistent demand that the 'stage was wonky' provided ceaseless chuckles. However, her playful perseverance provided a tough challenge for the sober cast who ingeniously improvised around the drunken decorum, incorporating the crazy into their classical world, to the extent where an appearance by 'Jeremy Corbyn' was made in the final court scene singing that classic Labour Party tune, 'We're All In This Together' from High School Musical.

Endeavouring to deliver her first scene or two in Shakespearean verse, continuously having to start over, proved extremely entertaining for the audience, as well as impressing us - I've seen drunks forget the order of the 'YMCA' so how she managed to maintain the challenging classical tongue for so long, I'll never know. However, as her performance deteriorated into a humorous and playful sabotage of the piece, the comical camaraderie of the cast, coupled with a forgiving audience, turned the final scene into a disorderly disaster, which despite being hilarious, confused my attention, with everyone speaking over each other, I didn't know where to focus.

The genius of both Shakespeare and Magnificent Bastards combined, creates the best worst piece of theatre you'll ever see, unstructured, unfiltered and undeniably brilliant. A truly outstanding fringe production and a must see. 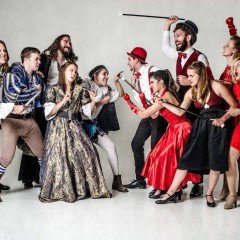