A crazy and chaotic show that's sure to get you laughing.

Zach and Viggo are two entirely ridiculous, but very funny men who, it appears, will essentially do anything to make people laugh. I can honestly tell you I don't think there was one person in the house last night that wasn't laughing. Whether we were laughing at Zach and Viggo, or at the expense of some very unfortunate audience members, they sure know how to keep a crowd happy.

At times, the show seemed so chaotic I was unsure as to whether it was part of the act or if they were actually that disorganised/not ready to come back onstage yet. Despite that, the audience seemed to love what was happening and I don't think they did anything that wasn't funny. I did feel somewhat sorry for some of the audience members they picked on, but to be quite honest, I've never been more grateful it wasn't me!

The lighting and sound both added to the general amusing nature of the show and there was no set at all. The few props they had were used in clever and funny ways and they performed little sketches of things that you would probably never think of when putting together a show like this, but that is probably part of the reason it was so funny.

Overall, although at times it was incredibly loose and one or the other of them wasn't ready for their moment onstage, it was very funny and an enjoyable evening show. If you are able to, I would highly recommend watching, just choose your seat wisely!

Zach and Viggo have their final performance tonight (Sunday 8th May) at 10pm. 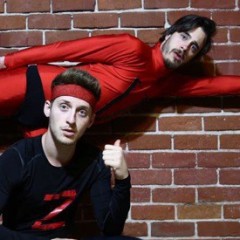 A crazy and chaotic show that's sure to get you laughing.