The Phantom of the Opera tells the captivating story of Christine Daae, a dancer at the Paris Opera House, as she falls in love with both the Phantom and Raoul (her childhood friend). The score is composed by Andrew Lloyd Webber with lyrics by Charles Hart & Richard Stilgoe. The general theme of the music is both romantic and spectacular.

The show begins with a striking Overture, featuring instrumentals from the musicals title number “The Phantom of the Opera”. We are then taken to the Paris Opera House where an extravagant musical is being rehearsed. In this scene we are introduced to the “Phantom”, a supposed ghost that is said to be haunting the theatre; and causing untoward things to occur.

Shortly after Christine runs into Raoul, her childhood friend. They share a sweet exchange with the sentimental song “Little Lotte”, in Christine’s dressing room. Raoul then leaves.

The sharp figure of the Phantom appears in Christine’s mirror. The Phantom transforms Christine into his dark labyrinth through the title song “The Phantom of the Opera”. Both Killian Donnelly (the phantom) and Lucy ST. Louis’s (Christine) vocals are extremely strong during this number in particular, their characters emotions are clearly presented. The song itself becomes extremely intimate at points.

When Christine finally returns to the Opera House, she recalls some details of her time with the Phantom. There is an apparent mix of fear and love from her.

The theatre managers begin to receive notes from the Phantom. The notes demand that Christine is to replace Carlotta, the lead in the Opera House’s new musical. This demand is not met by the managers.

Midway through the opening night performance of the new musical Carlotta’s voice begins to be controlled by the Phantom, clearly angry that his request was not met. The managers announce that Carlotta will be replaced by Christine. A grim corpse is then dropped from above the stage, the Phantom can be heard laughing maliciously throughout the auditorium.

Christine attempts to escape the theatre with Raoul. They head to the rooftops, where Christine tells Raoul all about meeting the Phantom. They pledge their love to each other, in the romantic song “All I ask of you”. Unknown to them, the Phantom overhears this entire conversation. In a heartbroken rage he swears revenge upon them. Act two ends with the Opera House chandelier thrillingly dropping from the top of the auditorium and crashing into the stage.

This particular moment creates great tension for the audience, with some even finding the chandelier crashing frightening.

Act Two, set six months on from the chandelier crash, opens with the extravagant number “Masquerade”. This number features great masks, colourful costumes and an extremely grand staircase. This is until they are disturbed by the Phantoms return. He makes the demand that Christine plays the leading role in their new musical production, before disappearing.

Raoul enters the lair, in an attempt to bravely save Christine. The phantom offers her a choice: she can either stay with the phantom and he will not kill Raoul, or she can leave, and Raoul will be killed. Christine kisses the phantom. This intimate moment fills the phantom with emotions that he has not experienced before. The Phantom lets Raoul and Christine go. He tells her that he loves her.

The rest of the company arrive at the lair, to save Christine. The Phantom sits in his chair and vanishes; only his mask is left.

The show is of course set in the exquisite Paris Opera House. This is well complimented by “Her Majesty’s Theatre’s” stunning architecture. The set is extremely grand with large golden statues, candles, beautiful drapes and an amazing onstage auditorium balcony/box. It truly feels like you are a part of the show, sitting in the theatre as all the action unfolds.

The show features an incredible lighting design, originally by Andrew Bridge in 1986. The use of candles, GOBO patterns & fog lighting really help to create the amazing atmosphere that is required to bring this show alive.

This fantastic classic production is certainly worth seeing, you will simply fall in love with it.

The Phantom of the Opera is running at Her Majesty’s Theatre in London, with tickets available until March currently. 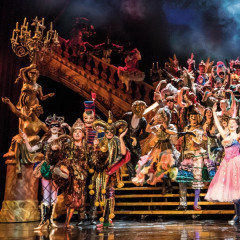