Before the performance started, we got comfy on on of the benches situated near the bandstand (I am in the middle, and my two friends, Gus and Bob are sitting next to me). We listened and observed as Nick entertained the audience by telling jokes and making minor mistakes. His performing area was very organised, and the way he presented himself to the audience really made me want to stay for longer. Nick mainly played songs starting from the 60s and then moved up the decades.

One of my favourite songs from him was a song from a band called The Searchers, which was called "Sweets for My Sweet", and it was released in the 60s. Unfortunately that was pretty much the only song I knew for I tend to hear it when I go to the arcade, which is quite often.

Being a member of the audience was pretty cool, mainly because I enjoy fresh air and being outside. Personally I'm grateful that I was able to have this opportunity.

There was nothing in particular that I thought could do with some improvement. If you are looking for some entertainment (or you just want to try something new for a change!) then I really recommend Nick Kelly's performances.

Thank you so much for taking your time to see my review, and I hope it gives you motivation to try something new or maybe watch a performance.

I am a student, currently studying music and Art. Here, you will see posts and reviews showing evidence of work and activities I have done. Thank you for taking time to view my account, I really appreciate it. :) 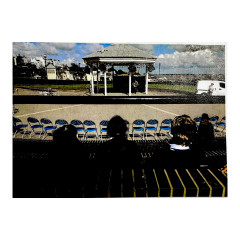