As part of the Old Red Lion Theatre's GRIMFEST, I attended a haunting production of Dracula's Guest, put on by Brother Wolf, an art/theatre company. The scene opens with a dimly lit sparse stage and eerie music floating through the room. Seeing this play on the night of Halloween certainly added to the atmosphere!

The character of Mr. Renfield rocks back and forth, and his superb physical acting was evident from the moment the play began. To those of you familiar with the works of Bram Stoker, Mr. Renfield's character in this play is a convergence of both Renfield (a patient in an insane asylum) and Jonathan Harker (an English solicitor) - though prior knowledge of the story is not necessary, as the plot quickly becomes clear. More than anything, it is the psyche of the two main characters - Renfield and Dracula - which pushes the play forward. Mr. Renfield, a prisoner in the castle of Dracula, questions why he has been brought here. In turn, Dracula mocks and tortures him, carrying out a twisted revenge plan which unravels as the play goes on.

What is fascinating about this version of events, is the unique perspective of Dracula - in a way, he is a victim in his own right. He is a victim of colonisation, and of the British Empire, as this play adds a thought-provoking commentary on loss and love. Despite the clear evil radiating off Dracula, through him, we learn what it means to be harmed and to thus cause harm in return.

This play is not for the faint of heart, as it is deeply uncomfortable at times - though that is what makes it so wonderful. The essence of the Dracula story is captured here. It is a stripped-back performance, as we are invited into the psyche of two characters. The simplicity and claustrophobia of the setting make the voice and physical acting more prominent. Renfield captures the essence of a prisoner, flitting between shudders of fear and moments of clarity, as he remembers his inner strength. Dracula is elusive, as he perfectly characterises a manipulator - he is charming, yet brief fits of rage unveil his true nature.

Dracula's gaslighting of Renfield is particularly powerful, as his attempts to make Renfield doubt his own reality bled into the audience. Dracula cites Renfield's "interpretation" as being the cause of his insanity, and as a viewer, we are also forced to question our interpretations of the play and its characters. Whilst Dracula is undoubtedly committing a truly evil act, the play blurs the line between victim and perpetrator. This is brought to a head, as ultimately, Renfield's insanity takes hold, and he becomes a Dracula-esque character, seeking revenge and becoming full of hate and spite.

Of course, there were a few moments of morbid comedy which cannot go unmentioned. Without spoiling anything too much, if you watch this play, keep an eye out for the phrase "love thy neighbor", and for any plastic heads!

This fascinating play is perfect for those looking for a Bram Stoker reinterpretation or for a dark psychological exploration of loss, revenge, and death. 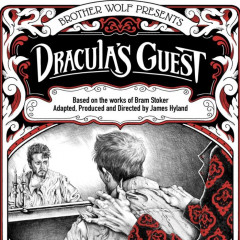 The thrilling tale of 'Dracula's Guest' by Brother Wolf