Visit the amphitheatre discovered in London at the Guildhall Art Gallery!

Have you ever wanted to see a Londinium Amphitheatre from 70AD? Visit the Guildhall Art Gallery to explore an excavated section, where pieces of the wall and the advanced engineering of the drains is visible.

I was lucky enough to visit this gallery in conjunction with attending a now-sold-out lecture put on by The Thames Festival Trust. Andrew Lane, the Education Officer at the amphitheatre, gave a talk on the history of the site, its discovery, and the games out on there, displaying several archaeological finds.

He spoke to us about how the remaining wood was used to date the amphitheatre, placing its creation in 70AD, and how the pottery found had carvings depicting the games, allowing us to understand the types of matches which were held. Bones of wild boars and bulls were also found, though there was a distinct lack of more exotic creatures such as tigers or lions - most likely because Britannia lay on the edge of the Roman Empire.

Lane discussed how specific archaeological finds could teach us about the audience in the amphitheatre, which could reach a capacity of ten and a half thousand spectators. For example, bone hair pins prove that women also attended such games, and a clasp of a gold necklace indicates that that included women of the elite. What was particularly fascinating was how Romans held traditions that we tend to consider "modern", such as giving souvenirs after games and recycling glass. (The enormous number of pottery shards found indicates that they must have been sold to spectators, and glass was found in a cullet dump which was used before their recycling process.)

The mudlarks (those who scavenge the river mud along the Thames) were also present, displaying the pieces they found and some even selling them! There were pieces of Samain pottery shards from Roman London, Victorian transferware, and cutlery from over 100 years ago, to name a few items!

I recommend visiting this site to anyone interested in history, archaeology, and life in Roman London! 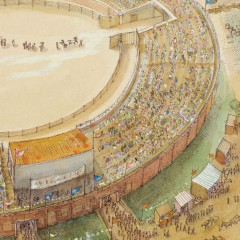 Visit the amphitheatre discovered in London at the Guildhall Art Gallery!