When Alasdair Beckett-King began his show with three separate entrances, the audience knew what they were in for – charm, light humour, prop comedy, and musical gags galore! If you're a fan of an over-dramatic Western Saloon entrance, then this is the show for you.

The comedy show is loosely centered around his three main fears of the ocean, but Beckett-King spends most of the time bouncing smoothly between countless new topics and jokes. It truly has a little of everything! One moment he is promising us a profound experience, and the next we are laughing about clocks, Kurt Cobain, cows in pastoral paintings, and P.E. teachers. His natural wit and clever comedy never fails to get a laugh from the audience.

Beckett-King plays into the fact that there is no deeper theme, and instead makes the show flow well with comedic callbacks and well timed jokes. He plays well off of his Scottish-Arthurian looks, adding in a few more intellectual jokes and wordplay puns.

There is not much more to say about this show other than the fact that it is fun, fresh, and leaves you feeling a lot lighter than when you came in! 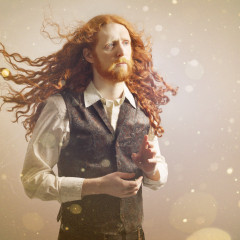