Ellie MacPherson is the new Bachelorette of the Edinburgh Fringe 2022! Except, this time her line up of men consists of all of the Presidents of the United States of America.

This cabaret-style performance was a masterful piece of acting and storytelling. The room opens with Party in the USA by Miley Cyrus, setting the scene. Then, three members of The Secret Service (AKA MacPherson's band) walk in solemnly in black tie, followed by MacPherson in a stunning bejewelled dress. The audience quickly learns that this won't be your run of the mill comedy show, as it combines theatre, powerful vocals, and witty comedy.

MacPherson plays the character of a lovesick girl, swiping through the Presidents and highlighting their flaws and fun facts. We hear about James Madison, the shortest President at 5'4", Trump's famously small hands, and Zachary Taylor, who died from eating too many cherries! Songs from the likes of Whitney Houston, Lorde, and Radiohead are belted out, sometimes as a sultry performance to seduce her Presidential crush, or sometimes in mockery of the Presidents!

A more somber ending concludes her show, as MacPherson reflects on the concept of loving Presidents, and America, and their soldiers. She switches gears entirely, posing a philosophical question about the nature of admiration, and expressing her conflicting thoughts about her family members who are US soldiers. The ending, whilst poignant and clearly important to her, was unexpectedly solemn, and not the high that I had anticipated such a raucous and exciting show to end on.

Nonetheless, this show was incredibly entertaining, as, much like the fantastic show Six, it combines history with a quirky persona, witty comedy, and songs that you can't help but dance to! 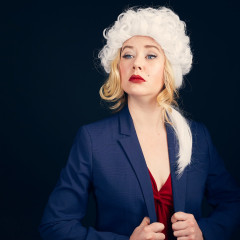