"A show about death, betrayal, and financial ruin". Emmy Blotnick brings a Google-rabbithole-descent to life in the most wonderful of ways.

An idea born out of the golden days of pre-Covid has taken on an entirely new life, absorbing the absurdity of Blotnick's past two years. Her plan for the 2020 Edinburgh Fringe was simple - spend two minutes discussing each of the 30 fragrances released by Jennifer Lopez. The 2022 show does begin with this, with hilarious quips about Lopez's bizzare fragrances specifically for "Florida", or for "Asian women." However, the show then veers off course in the most wonderful of ways.

Blotnick takes the audience on a journey of sordid family scandals and the brutal impact of Covid - all the whilst eliciting non-stop laughter! Each fragrance has a story, and Blotnick's honesty and rawness about tough situations is what makes her stories so fascinating. She doesn't shy away from the "bad", spilling the beans on her Tory-turned-white collar criminal brother. Whilst Blotnick's husband lost his restaurant and worked hard to rebuild during the pandemic, her brother, a hedge fund manager, committed wire fraud to retain his "glass-box" penthouse, and went to prison weeks before her first Edinburgh show. Blotnick surprisingly manages to draw out the humour from this situation, joking about how he insulted her "small home", even whilst on the way to his new cell. Her stories are bold and shocking in the best way.

If this seems like a review of two shows, it's because it was - this show had two stories working in tandem, both of which blended together well. The loose format of Jennifer Lopez's fragrances allowed her to veer off into exciting tangents, before coming back to her central theme. The two stories were the perfumes, and Blotnick's life. But the two stories were also the absurdity of Lopez's fame and perfumes, alongside the realities of everyday humans who have to work for money. And the stories of the "young bad boys" (as Blotnick refers to them), who live in Florida, alongside the rest of the "good guys" just trying to live their lives.

Laughter, wry smiles, and shocked faces filled the hall, as Blotnick weaved drama, humour, and tragedy together in a way that spoke to the situations of so many people. 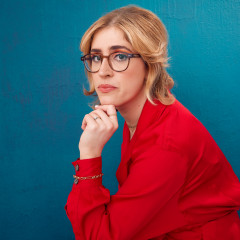 Emmy Blotnick: The 30 Fragrances of Jennifer Lopez: A Show About Death, Betrayal and Financial Ruin

"A show about death, betrayal, and financial ruin". Emmy Blotnick brings a Google-rabbithole-descent to life in the most wonderful of ways.