Ten years after Kiwi comic Eli Matthewson came out, his father, aged 62, also came out to the family. In part, Daddy Short-Legs is a response to this revelation and how identity and family lean against one another. It’s also a family photo album of a comedy show that’s interspersed with (literal) snapshots from Eli’s life.
There’s charm and candour to Eli’s stand-up. He saunters through jokes and anecdotes with easiness, a causal drollness. The set-ups wait their turn: overly sexualised small talk about motor vehicles; an unfortunate looking donut-shaped cake drizzled in white glaze; what it’s like to have a biblical name like Eli, because surely there’s comedy in that too. The last one’s a long-ish walk, but as it happens there is.
Mullets, like dungarees or Bristol, are bisexual. Fact. (Eli takes a poll on the most bisexual city in the UK to stress test the British to New Zealand translation. An overwhelming show of hands confirms Bristol as the front-runner.) He’s pleased his new hair-do has given rise to the the office rumour that he bats for both teams, and wonders whether this slither of potential heterosexuality will give him an edge in the Fury Road apocalypse (apocalypses are hetero, obviously).
Eli pokes fun at some of the silly labels that complete for some kind of queer purity, like the difference between a ‘gold star gay’ (a guy who has never had sex with a woman) and the rare ‘platinum star gay’ (a guy born into this world by Caesarean who has never touched a vagina in his life, even in birth). Side-stepping online trolls and toxic expectations as they pop up, Eli has a light touch but there’s a weight and seriousness to his comedy that sits just below the surface.
Like most of the jokes in the show, identity plays a huge part. After a reviewer criticised his comedy for focusing too much on the subject, Eli’s promises to leave aside jokes about what it’s like to be a gay man. Evidently this is a sore spot, and the stand-up veers where it may regardless of the sniping. I’m glad Eli ignores the gripe, because the joyful anecdotes about his relationship with his father are a highlight of the show.
Daddy Short-Legs is a delight. I hope to see more of Eli on the circuit in the UK and I hear that SNORT (the New Zealand improv comedy supergroup, which he’s also in alongside big-time Kiwi export Rose Matafeo) is a also a great time. One to watch, for sure.
Header Image Credit: Caitlin Murray 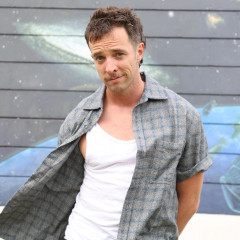