Sap is a loose adaptation of Ovid’s Metamorphoses, a tale of Apollo and Daphne – where Apollo’s obsession becomes increasingly intense and concerning. In the original tale, Daphne’s parents turn her into a plant whenever Apollo comes close. However, in Rafaella Marcus’ debut play Sap at Summerhall, this is reimagined metaphorically and the tale itself is grounded in modern sensibilities.

In Sap, Rafaella Marcus explores bisexual erasure, abuse, and the reality of being a woman today. It’s frank, refreshing and relentless in its exploration telling a rather dark tale. In Sap, Daphne is stuck in an office job – gossiping with co-workers, trying her best to get stuck into the social dynamics of her co-workers, and just generally feeling a bit lost. There’s something quite Fleabag-esque about the character of Daphne, or perhaps just Jessica Clark’s depiction of Daphne, as she whips her head around interacting with the audience with her witty stream of consciousness and a knowing glint in her eye. Rafaella Marcus fills in the roles of supporting characters with impressive ease, clearly distinguishing the nuances between both Daphne’s former and present love interests.

When Daphne has a one-night stand with a co-worker and then falls in love with a woman at a bar – her life begins to change for better and then for worse. Daphne enters a loving relationship with said woman, but her past begins to creep back into the picture – literally, the former one-night stand starts to stalk and abuse her (both mentally, and physically).

A white lie Daphne told to her partner about not being attracted to men spirals out of control, and is used against her. The play becomes frantic, with Daphne, to no avail, trying to untangle herself out of the situation she has found herself into. Nature is used as a metaphorical device in Daphne’s monologues as she suffocates from the situation. Sap is difficult to watch in terms of subject matter, but it’s also difficult not to take your eyes off it in terms of performance. On the reflective floors, Clark and Marcus both present sensitivity in their characters but easily provide the dramatic intensity some of the scenes demand.

The originality in Marcus’ exploration of bisexuality is fantastically complex. It centres on the experience of bisexual women and the fact that they are more likely to be abused by their partner than heterosexual or lesbian women – come the end, this is a fact that the play is open about starting an enlightening discussion on.

Sap shifts gears with ease, graciously moving through the issues of the plot with sensitivity and a whole load of tension. It’s difficult to believe that they fit all of this within just over an hour – Sap is a reimagined tale with a strong story and convincing cast to back it. 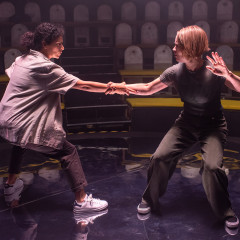