Musical real-life sisters, Chloe and Tabby, take to the stage with their debut show Bittersweet

The musical comedy duo is comprised of real-life siblings Chloe and Tabby, and in their vibrant debut show Bittersweet, the multi-talented sisters take to the guitar and double bass to sing songs about those that have wronged them. An unlikely series of revenge stories unfolds, but one that Edinburgh Fringe is all the more better for hearing.

In Bittersweet, The Sugarcoated Sisters tackle big topics such as relationships, moving back home, and hate online. It is an unashamedly honest show, and akin to the musical comedy of Flo & Joan, they use song to navigate through their amusing life experiences. Their clever quips and musicality really shine through in their performance, and The Sugarcoated Sisters absolutely own the stage that they are on.

Doing musical comedy is bold and quite brave, and in Bittersweet some songs definitely garner more laughs than others. Their opening song introducing themselves is catchy and fun, setting the tone for the rest of the show – highlighting the eccentricities of their life so far. In one later song, the duo don caps, moustaches and blazers mimicking the stereotypes of their haters. However, the performance bordered on pointless pantomime gags and felt rather misplaced.

Even though not every song was a hit, the performers themselves were charming enough to make the overall experience entertaining still. Their discussion on dating toxic men, handling dating apps and the logistical issues of sharing a childhood bedroom together as adults, are enough to make any Fringe-goer burst out into laughter.

Bittersweet is a deep dive into the lives of two sisters with some absolutely bizarre but brazenly honest stories that make the hour ahead a whirlwind of musical fun.

Read our interview with The Sugarcoated Sisters here 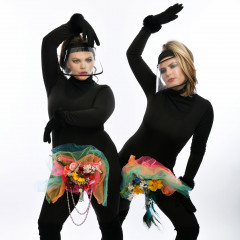 Musical real-life sisters, Chloe and Tabby, take to the stage with their debut show Bittersweet