Walking into Grace Campbell’s latest show, you can tell that she has a fierce following – in the queues, strangers share stories of exes and their shared love of her juicy anecdotes. There’s a slight buzz about walking in and hearing about her perspective, almost as if this show were an advice column in a magazine. Campbell’s unfiltered and relatable comedy navigating relationships, sex, and self does not disappoint and is fantastically written.

Campbell sifts through outlandish anecdotes on fancying football lads, breakups, letting go of male validation and some unfortunate (but hilarious) sex stories with infectious charisma. She also makes it clear from the get-go, that this show isn’t to exclude men – in fact, she loves men and wants this show to appeal to them too.

Combining some wonderful audience interaction of people sharing their own relationship experiences, from love bombing to having a first date in a gastro pub (which Campbell attests is rather boujie), Campbell appears as some hailed love guru on stage, one that has had their trials and tribulations and is completely shameless about them – again, the charm about Grace Campbell is that she is outrageously real.

A Show About Me(n) is a show about Campbell’s relationship to men, she is an honest open book and reassesses her stance. As much as it is very funny, there are glimpses of Campbell’s vulnerabilities that seep through – it’s actually infectious, and it’s no wonder that audiences resonate so much with Campbell. She says the things that sometimes we are hesitant to admit, but hearing them from someone else who is healing can help.

In one section of the show, Campbell admits going off-book and talks about her recent article in The Guardian to the supportive cheers of a handful in the audience. Her piece in The Guardian is an incredibly powerful one exploring her rape, comedy and how the justice system would use it against her. Her discussion on this, as well as her stack of life experiences, felt really poignant and moving.

The room itself felt like a safe space for Campbell to share these stories, and her take is brutally honest, graphic and witty – not to inflame Campbell’s ego further (especially with a show that claims to be about “her two lifelong passions; men and herself”) but Campbell’s voice is really what we need to hear right now.

By the end, everyone gets up from their seats and that initial buzz never faded. In fact, groups splintered off even more chatty than before talking about their love lives both with their partners and ones of self-love. Campbell’s fiery show burns brightly at the Edinburgh Fringe Festival. 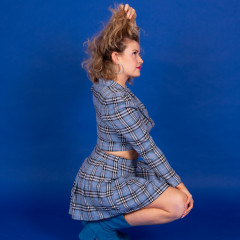 Grace Campbell: A Show About Me(n)