Ruckus is an extremely powerful one women show about a coercive control relationship.

Lou and Ryan met at an engagement party in a rather unorthodox way. By that I mean she yells at him for being a “prick” and throws gin and tonic on his shoes. After dating for a while, the cracks in Ryan’s personality begin to show, and Lou finds herself isolated from her family with this ticking time bomb who is doing everything to chip away at her with each day that passes.

The situation presented in Ruckus is one that’s all too familiar – especially for women. The statistics on this kind of abuse are obscene yet it’s one of the least talked about types of abuse. So Lou is going to tell you her story, and she’s going to tell you twice.

Jenna Fincken, the actor who plays Lou, was incredible. Using a mix of physical theatre and visual aids, Ruckus has you trapped. The tension that Ruckus builds is heart-wrenching because you know exactly what is coming, and there is absolutely nothing you can do about it. It paralyses you and you have no choice but to watch it happen – sound familiar?

Using only a voice over to portray the character of Ryan, was a very clever way to represent the power of abuse. Made up of different women’s experiences, Ruckus creates this very realistic relationship that rips your heart out at the thought of anyone having to endure this.

I initially thought Ruckus was Jenna’s own experience because of how brilliantly her portrayal of Lou was. If this isn’t Jenna’s story in any part, she did an amazing job at tapping into that shared feeling of anger and injustice women feel to play this part the way she did.

Jenna was a complete stand out, and her performance reduced me to pieces. Ruckus is not only a must-see, it's your fringe reminder to never say, “why didn’t she just leave?"

Ruckus is playing daily at Summerhall's Cairns Lecture Theatre at 15:30.

For more information on domestic support, including advice on where to get help, visit the Gov.uk website 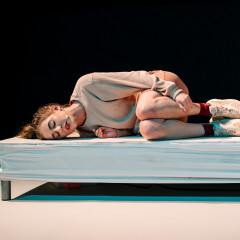