Hannah Fairweather has a list of people who have wronged her. Do they all deserve to be there? Absolutely.

Hannah’s show, if the title isn’t a big give away, is based on Taylor Swift’s album Reputation. But more importantly, the song ‘Look What You Made Me Do’, when Taylor sings,

"I got a list of names, and yours is in red, underlinedI check it once, then I check it twice, oh!"

There is no doubt that Hannah is funny, because she is. She’s got a good sense of humour and she’s not afraid to go to places most wouldn’t. However, unlike her male counterparts, she does this without being offensive or marginalising any group. The only time I felt marginalised during her performance was when she started talking about golf, and then I admit I tuned out.

You see Hannah identifies as the Taylor Swift of comedy, and not because she’s pretty and blonde, but because she’s been screwed over in male-dominated industries her whole life and she’s tired of having nowhere to talk about it. From a women’s golfer to an accountant to a comedian, Hannah can’t move for over entitled white men who think there's no place for women in their industry.

Hannah wrote this show for young girls because she knows she isn’t the only one who feels that way. A genuine reason for a genuine person who had her crowd delighted to be in her company. I think we all have a Hannah in our friendship circle and despite being an ex-golfer who has travelled the world and has parents that are still together, she’s actually pretty relatable.

The issue I have with Hannah’s show is she spent most of the time explaining herself and her jokes. Hannah seemed nervous and apologetic, which may be the product of being silenced or being a woman in this boy’s club, but Hannah has earned the right to be here, so she needs to act like it. Hannah has the goods but she just needs to work on putting them together.

The audience loved her, and they completely bought what Hannah was selling. But for me, a few more years, a few more runs and a management team that doesn’t screw her over, and the next thing you’ll see of Hannah Fairweather: Live at the Apollo.

Hannah Fairweather is performing every day at Just the Tonic at the Caves (Just Up the Stairs) at 14:25.

Read our interview with Hannah here.
For tickets and more information, visit edfringe.com 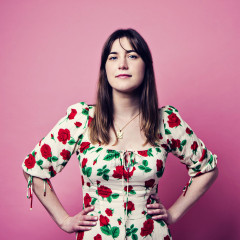 Hannah Fairweather has a list of people who have wronged her. Do they all deserve to be there? Absolutely.