There’s quite a bit going on this show; but the underlying theme throughout is simple – a hysterical portrayal of a conductor who happens to share subtle traits with Donald Trump and Boris Johnson; with many not so subtle references to current and recent political affairs, often expressed in music terms.

If you’ve ever been involved in performing in an orchestra, this is definitely a show for you to see!

Starring Claire Parry, the satirical journey engages the audience to be part of the show in what can only be described as a mesmerising way. The control Parry seems to exert over the whole audience through simple expression, physicality and suggestion is mind-blowing. Audience members were moving music stands, moving about the room, playing instruments and partaking in the show’s narrative with exceptional ease. The ability for a solo performer to command such engagement of an audience is a skill not to be reckoned with.

Indeed, the show goes further than inducing simple laughs. The musical and comedic action is interspersed with moments of seriousness and trauma. This reminder of our fallibility as humans is a great way to ground the show amongst an otherwise fairly absurd set of occurrences.

Parry exhibits fantastic comedy timing; has a way of returning to jokes and situations referenced in earlier segments of the show, and all in all, provides an hour of active entertainment which kept me smiling throughout. 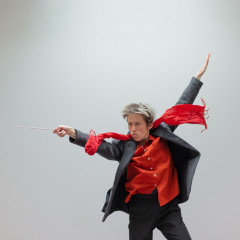