Telling the shocking real life story of David Reimer, a boy forced to live as a girl as part of a doctor’s experiment.

Exploring biological sex, gender and the question of nature vs. nurture, ‘Boy’ tells a tragic story with compassion, humour and honesty. But the true tale is anything but funny. In 1966, the Reimer twins were taken into hospital by their young parents to be circumcised. The procedure went wrong and the doctor performing his surgery accidentally damages baby Bruce’s genitals beyond repair.

Concerned, Reimer’s parents took their son to sexologist John Money after seeing him on TV. Money, who had various now-debunked theories about ‘gender neutrality’ suggested that Reimer undergo sex reassignment surgery and be raised female. Bruce was forced to become Brenda. He later chose the name David, as he really felt like a boy. The twins discovered the secret in their teens and suffered from severe depression through their whole lives.

I think I would have enjoyed the show more if I had been more familiar with the story. For most of the show I was sat in shock, my mind reeling with the horrific nature of the story being told. The show used soft toys and dolls to represent all of the various characters, leaving the stage a sea of toys by the end of show. With my mind overwhelmed with the story, I couldn’t really understand the purpose of the toys and how they added to the story, apart from making great props for the two talented actors on stage. The design of the show slightly distracted from the serious themes and content being performed, and at times this comedic tone seemed wrongly placed.

The story strongly reminded me of the Peter Neubauer case with triplets, which was later made into a documentary called ‘Three Identical Strangers’. Both works explore children exploited for research trying to prove their theories in completely unethical ways, and both stories must be more widely known to condemn the use of children in this way. 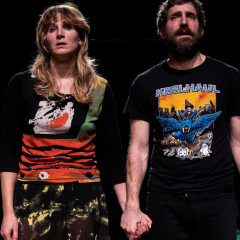 Telling the shocking real life story of David Reimer, a boy forced to live as a girl as part of a doctor’s experiment.