This the writer of Musclebound, Rosy Carrick’s, honest exploration of herself through a journey to sexual liberation with ‘80’s beefcakes’, discussing sexual power and female pleasure.

From the moment the light went down and this clip of Arnold Schwarzenegger played, the whole audience were crying with laughter – and that was before Carrick had entered the stage. If you watch this clip, you know what you’re in for: something silly, sexy but sincere. It set the tone for the show which was full of niche pop culture references and incredible bodybuilders.

I couldn’t help but adored the style of Musclebound with the videos and images projected behind her, my favourite being a picture of 11 year old Carrick’s diary calling herself a ‘sex machine’. I thought the writing was clever and witty, telling an extremely personal story in such a healthy and positive way that was so entertaining for the whole audience. We couldn’t stop laughing. Maybe because the space was so intimate and small, but from the very first second it seemed like the audience trusted Carrick to take them on a journey to another universe. Even with so little in the way of set and props, the show looked well put together and I loved the creativity of projections and joke shop dummy.

Musclebound was intelligent, thought-provoking and felt like Carrick was really open to sharing her story with others. After watching the show, you’ll be sure that female pleasure is indeed in crisis - but this play isn’t about statistics, it’s about being comfortable and truthful about your own sexuality. 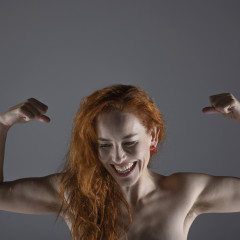 This the writer of Musclebound, Rosy Carrick’s, honest exploration of herself through a journey to sexual liberation with ‘80’s beefcakes’, discussing sexual power and female pleasure.