Voice MagReviewsBlack is the Color o…

Never have I seen an audience so captivated as when Apphia Campbell took the stage as Mena Bordeaux, or as you know her, Nina Simone.

Where do I even begin?

As I sit here writing this review in the Pleasance EIIC, I am still shaking, in a complete state of shock from what I, and a sold out theatre, have just witnessed.

Black is the Color of my Voice is the story of Nina Simone, the woman behind the music and everything that made her who she was – is – to the world.

On stage was nothing more than a bed, desk, suitcase and two chairs. Not that the objects on stage made a blind bit of difference, because the moment Apphia Campbell stepped out, all eyes were on her. Captivated, silent, engaged and mesmerised were the audience, as if Nina Simone herself stood there in front of us. The look, the voice, the mannerisms and wit were all Nina – it was all there.

Locking herself away for three days to reconnect with her soul, and make peace with her deceased father, Mena Bordeaux (the pseudonym Apphia created) tells us a story. The story of how she went from the three-year-old classical musical prodigy from Edenville, to being one of the most powerful voices of a generation. She recalls her involvement in the Black Civil Rights movement and how “when they would raid the houses of Black Panther members’, my records are one of the first things they would take.”

A voice so powerful it was inciting something in people that the oppressors needed to stamp out. And like Nina, Apphia has a voice I’m certain could resurrect the dead.

Apphia’s performance was phenomenal. PHENOMENAL. Bringing me to tears four times throughout the show, Mena speaks of love, loss, trauma, race and finding your purpose. A standing ovation followed.

One of the most powerful scenes for me – and incidentally the one that made me cry first – was when Mena recalls the first time she noticed she was Black. More accurately, the first time she noticed being Black was an issue. As a Black woman myself, this is something I know all too well. Articulating the first time you ever felt different is not an easy feat. Yet, the way she performed this all too true realisation many Black people have, resonated so deep within me that I couldn’t help but express that with tears.

I’ve always loved Nina Simone’s music, but I never delved too far into the person she was. Black is the Colour of my Voice has bridged that gap for me, and others like me. If I could give Black is the Color of my Voice ten stars, I would. But I can’t. So, instead I’ll say it’s not often you leave the theatre feeling as if you are on a different spiritual plane. Something inside of me feels different, moved and in tune and that’s all because of Apphia. Thank you for pursuing the moment you knew that this play needed to be made. It was exquisite.

Black is the Color of my Voice is playing throughout August at the Pleasance EIIC at 15:00. And, it will be the best hour and ten minutes you have ever spent in a theatre. 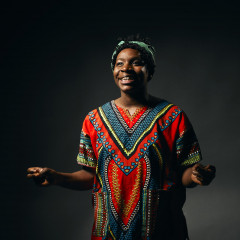 Black is the Color of my Voice

Never have I seen an audience so captivated as when Apphia Campbell took the stage as Mena Bordeaux, or as you know her, Nina Simone.