Voice MagReviewsAre You Being Murder…

I love to see classic TV actors at the fringe, keeping their passion alive and doing what they love most. Arthur Bostrom from Brit classic ‘Allo ‘Allo, starred in Father Brown writer David Semple’s ‘Are You Being Murdered?’ which is based around another classic British sitcom, ‘Are You Being Served?’.

‘Are you Being Murdered’ follows Jamie Button, a seasoned supporting act who knows his primary goal is to "stay invisible, and not steal focus" from the stars. Maybe once Jamie dreamed about a day when he might be the leading man, but for now, he’s content with being an extra – although we mustn’t use that word.

Jamie’s role in ‘Are You Being Served?’ is to convincingly shop for hats in the background, remembering to be invisible and not steal focus. Until one day, a fellow supporting actor, about to be gifted with his first line in the show, is murdered. It’s now up to Jamie – for some reason – to turn Miss Marple to solve the tragic and sudden death.

The premise of Are You Being Murdered? is a good one. It’s very British and it employs the golden age of television everyone is always very nostalgic about. However, the premise being good is where it ends for me – I’m sorry. You can tell a lot about the show when there are people around you unashamedly nodding off. One of them even put sunglasses on, in a dark room, to conceal the fact that he was, in fact, nodding off.

I’m not quite sure where the problem lies. There's no doubt that Arthur Bostrom can act. He embodies the energy of your classic British favourites, he even mentions a few of them too, but something about the whole show just fell flat, and not just Arthur stumbling on his lines.

Before the show we were warned that due to technical difficulties, there would be no light changes. I refuse to believe that changing a couple of lights on cue would have made a whole lot of difference, but on the other hand, something was certainly missing, so maybe?

Arthur has charisma, he has charm and his energy is warm and nostalgic, but this play, it wasn’t doing it for me. Perhaps it was the coldness of the Pleasance EEIC. It’s a much more formal, corporate venue in comparison to the Underbelly, for example. But again, for such a seasoned performer, could this really have been the issue?

Another thing that bothered me about Are You Being Murdered? is the setup. Thanks to my mother, I’m somewhat of a British murder mystery TV junkie – classics like Poirot, Midsomer Murders and Marple were the background noise to my childhood – but this did not at all feel like or have the goods of a great murder mystery. Maybe because it was a one man show? Maybe because it was the twist ending that felt like an afterthought?

I did notice a lot of the older audience members found room to laugh so perhaps the nostalgia of Arthur Bostrom and all he stands for really is the driving force behind the entire show. If that’s the case, and if that sounds like something you want to be a part of, then Are You Being Murdered? is playing at Pleasance EEIC daily at 12:00 pm. 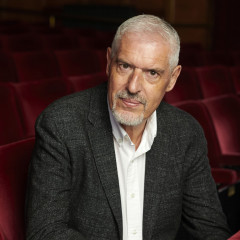 Are You Being Murdered?