Andrew Maxwell is more than the narrator for MTV's Ex on the Beach, he's a force to be reckoned with.

The wife of the couple I befriended in the queue had absolutely no idea who Andrew Maxwell was. I didn’t think I did either, until he opened his mouth, and low and behold, he’s the narrator from MTV’s Ex on the Beach. A guilty pleasure show from my teenage years, but I always thought the narrator was up there with Come Dine With Me’s Dave Lamb and the guy who says, “Welcome to the Big Brother house.”

Well, after last night, I will never refer to Andrew Maxwell as the narrator of MTV’s Ex on the Beach ever again. He will be the comedian who sold out the Gilded Balloon Teviot Debate Hall on a Sunday night. Andrew Maxwell brought the house down. From the moment he walked out on stage in those cut off jean shorts, Hawaiian shirt (very Magnum PI) and couldn’t get the mic to work, the audience erupted in laughter. He had us right where he wanted us… off Zoom.

Krakatoa is all about the unpredictability of our world and Andrew wants you to know he’s not a fan. One thing Andrew thought we would all agree on, at the very least, is how we wear a mask – but apparently not.

“Who are those people who walk around with their mask just covering their mouth? Are they the ones trying to get their balls into a condom?”

Andrew has a way of insulting people that regardless of how offensive it might be, you can’t help but laugh. Yes I’m talking about his strong dislike for little fat boys called Callum, and how he takes real issue with the way they occupy Edinburgh’s olympic-sized pool on Dalkeith Road.

Andrew is the king of regional accents. If you didn’t know he was Irish, you’d swear he was Scottish, or Brum or from Leeds. The Leeds accent skit is the funniest thing I have seen and heard in a long time. It had everyone in stitches and I can’t believe it’s something I haven’t noticed before. It’s also something I’ll never be able to unsee, so thank-you for that.

Krakatoa is a genius metaphor for everything going on in the world right now, and as terrible as it is, thank God for Andrew. I will say, Andrew nearly lost the house’s attention when he started comparing the Scottish referendum to Brexit in a room full of Scots. Not a great move considering the one time he’s been attacked on stage was at a former Edinburgh fringe, but hey-ho. With a swift subject change into something equally political but further from home, the room was his once again.

Andrew Maxwell is performing every day at the Gilded Balloon Teviot Debating Hall at 21:30, if you can get a ticket that is. 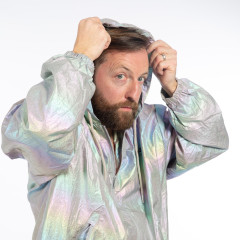 Andrew Maxwell is more than the narrator for MTV's Ex on the Beach, he's a force to be reckoned with.